The Young Rakers/Bootlegger’s out of Albany, NY took home the 2nd annual Cap City Classic title.  9 quality teams made the trip to Troy, NY for a double elimination tourney which featured for the first time the usage of radar guns to determine illegal pitches.  The Young Rakers swept the tournament 4-0, first beating the Misfits out of Westchester 10-4, then defeating the Men of Iron (Strasburg, PA) 10-6.  They then defeated the Titans out of Coxsackie, NY 10-4 in the winner’s bracket final, and completed the sweep by defeating the Titans again in the finals 16-6 in a much closer game than the score indicated as The Titans took a 6-2 lead in the top of the 3rd to which the Rakers responded with 6 runs in the bottom frame. 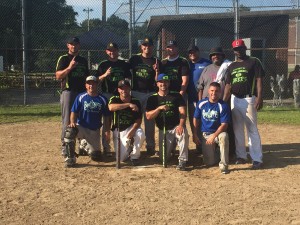