After losing their first game of the tournament Team Stats won 7 straight games to take home the 2014 Class A 10 man Michigan state tournament. In their first game, Team Stats lost to Stallions of Port Huron. That set up three more games for Saturday. Beating the Buccaneers, KOA and Hurricanes (all from Port Huron). In the first two games Sunday morning, Team Stats took down Jets Pizza from Bay City and defeated Stallions to make it to the championship round against undefeated Secory Flyers. Team Stats defeated Secory’s  14-8 to force the “If Necessary” game.

The final game was nothing less then expected. Team Stats jumped to an early lead scoring 9 runs in the bottom of the first. Secorys chipped away and came back to tie the game in the top of the 6th with a grand slam. Team Stats answered in the bottom of the 6th with two runs. Top of the 7th, needing two runs to tie, Secory’s had guys on 1st and 3rd with one out. A ground ball up the middle to middle infielder Jason Hoisington resulted in an unassisted double play to end the game 17-15.

Team Stats was lead by pitcher Ray Randall and a solid defensive. The offense was led by Jordan Elliott, Jeff Woods, Justin Davis, and Toby Larkin.

You all know how hard it is to come back through the losers bracket (especially after losing game 1). Great weekend for Team Stats. 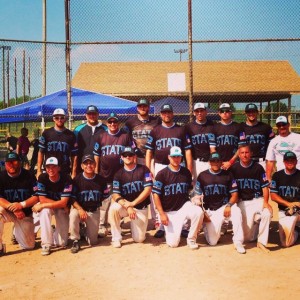