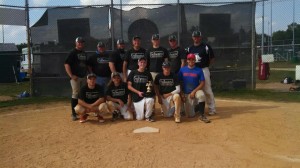 Stillwaters Presbyterian won 2014 Pa Church States Last in West Chester, Pa. They beat LCBC Orange from Lancaster 12-2 in a 5 inning mercy rule. The second game they played the Wings from West Chester and won in extra innings 11-10. Later on in the day they played the Wings in the finals and beat them 14-6. This is the first Church State Title in Southern Chester County Church League’s History. The team was led by the defense and timely hitting, along with great pitching from Mike Birney in all 3 games.