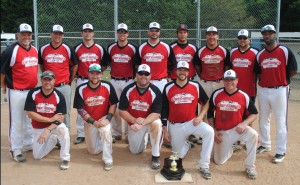 Our Gang of the Shenango Vally Modified Pitch League held on behind the pitching of Jason Evakich to pull out the championship game in the “If Necessary” game, defeating the Yankees of the Roberto Clemente League, Lancaster, PA 13 – 11 for manager’s  Geno Rossi and Dean Vadala’s team.
Our Gang won their first game defeating No Off Season of the Culmerville League, 13 – 3 then handed Fisher’s of Strasburg League,  PA  their first loss 12 – 2 before taking Extra Innings to defeat Boo Augustine 0f the Culmerville, PA League 12 – 2 to make it to the finals of the winner’s bracket where they ran into Pack Ratt Sports Cards of Big Man Harley Flick’s  Chicora League whom they defeated 14 – 11 in an  evenly matched game to make it to the final championship series.
The Yankees of Lancaster, PA won their first game defeating Nate Bannick’s Auto Soft 12 – 2 before dropping a tough one to Pack Ratt Sports Cards 9 – 8 as the Pack put together four runs in the bottom of the seventh inning to pull out the win 9 –  8 and send the Yankees to the loser’s bracket. The Yankees then put together four big wins to make it to the final championship series against Our Gang. In the first game of the final championship series they blew away Our Gang 24 – 4 to make it to the “If Necessary ” game. But Our Gang won the final game to 13 – 11 to win the championship.