Home > Tournaments > Fishbone (Pine Grove Pa) win 2015 Pa 10 Man Modified “C” West
The ASA of PA 10 Player Modified Pitch West Class C State Championship Tournament was played at the Vernon Township Field with Fishbone of District 3 coming through the winner’s bracket undefeated, compiling  five consecutive wins without a loss to win the championship.
Fishbone of Pine Grove, PA in District 3 was managed by Scot Delenko of Auburn, PA pushed across wins against Balls Distributing of the Chicora League 14 – 2; Celtic Cafe of the Franklin PA Venco League 11 – 1; then bested McCormick Construction 16 – 6 of the Harbocreek League of Erie, PA,; They  then won the winner’s bracket final by blasting Rapid Reaction of the Franklin, PA Venco League 20 – 0 to enter the final championship series without a loss where they caught Rapid Reaction again and bested them again, beating them 10 – 5 to win the championship
Rapid Reaction finished in second place with a 4 – 2 record
McCormick Construction finished third with a 4 – 2 record
Red White and Blue from Minersville, PA of District 3 finished fourth with a  of 4 – 2 record 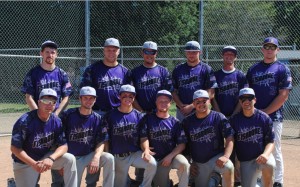