Home > Tournaments > Fat Tee’s (Erie) Win 35+ win 2014 Pa 10 Man Modified
Fat Tee’s of Erie, PA was able to squeak by Los Anejos of Hazelton, PA, in the last half of the seventh inning of the championship game, scoring two runs to win the Championship 3 – 2.  Fat Tee’s had defeated Los Anejos in their first outing of the tournament. Los Anejos jumped to an early 3 –  0 lead. But Fat Tee’s pitcher Brian Dewey started throwing more of his great moving knuckleball to shut down Los Anejos later in the game as Fat Tee’s came back scoring two runs in the 3rd , one in the 4h, 5th, 6th  and the winning run in the 7th to win 6-5.
Los Anejos fought their way back through the loser’s bracket to meet Fat Tee’s and pitcher Brian Dewey’s knuckleball again in the first game of the championship series where they took an early 2 –  1  lead which they held until the bottom of the seventh when Fat Tee’s scored their two runs to win the title.
The tournament was held at the Culmerville No Off Season complex where all of the games were played on the Artificial surface covered infield only.  The No Off Season complex has six artificial surface covered fields (Five Youth Fields and the one adult field). 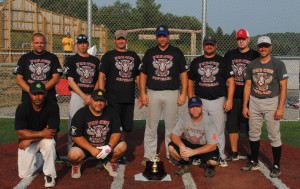 The five youth fields were constructed this past fall with another two longer fenced fields scheduled to be built for use with older youth teams and adult teams for the 2015 season.