Summit, current classed “A” in Pennsylvania defeated Young Guns (also classed A) in a best of three series 2 games to none. The first game was won by Summit 15 – 12. The second game was won by Summit 15 – 3. Terry Schwenk was the winning Pitcher in the final game keeping the Young Guns off balance. No walks, a solid defense (a hallmark of Summit) with timely line drive hitting was the key. 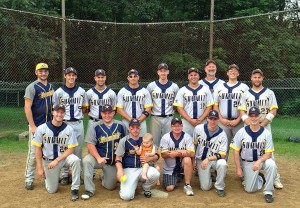