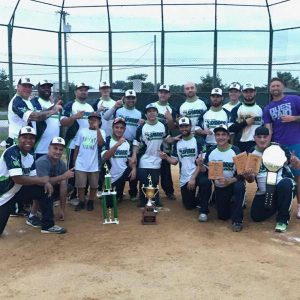 Managed by Fred Sorbello and led by pitcher & series MVP Tony Ayars, Sparks Electric won the best of 5 series in four games over the defending champions Servicemen’s Club.  Tony Ayars won Game 1 (score 6-2 )and the Game 4 (score 11-5), and held the league top offense Servicemen’s Club (averaged 12.5 RPG) to only 7 runs in two games.  Since 2007, Fred Sorbello has led Sparks Electric to the league’s finals 9 out of the last 11 years, and this is now his 5th league championship.