Servicemen’s Memorial Club went down in the best of five final series 0-2 vs. Sparks/Stus (# 1 seed). They were able to win the next three in the row.  Stu’s only lost 2 games ALL year!  Terron Mason (Series MVP) and Brent West combined to hold the very talented Stu batters to only 7 total runs in games 3, 4 and 5. The final game was attended by hundreds of fans at the Penns Grove complex on Route 130 in between the Commodore Barry and Delaware Memorial Bridge. A very competitive 10 Man Modified league that uses the Clincher Gold Softball. 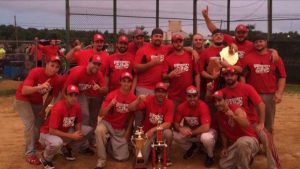