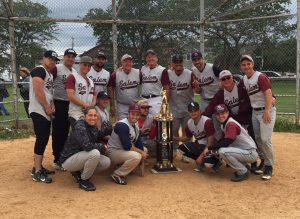 Salem Won the Alumni “A” Division against a very tough team (Royals) for their second title. Salem took game one in the best of three, 1 -0 in 10 innings behind the pitching of Sal Guerriero. Royals won game 2, 3 – 2. In the rubber match, Salem was ahead 3-1 with 2 outs in the 7th, but the Royals scored twice on a few miscues to tie the game 3-3. The game was finally decided in the 11th with Salem winning it 4-3. An epic battle that could have gone either way. Sal Guerriero pitched all 11 innings for the win. Hats off to both teams.