Ma Parkers beat McCormick Co. to capture the Harborcreek Modified Softball B Division Championship with a score of 23 to 11 in five innings. Ma Parkers was led offensively by Justin Scarpitti who had four hit performance and the stellar defense of Chris Hay at Shortstop. Ma Parkers jumped out to an early lead putting up 14 runs up on McCormick in the first inning and then put it completely out of reach in the 4rd with a two run triple by Joe Montgomery and home runs from both Mike Parsons (3 for 3) and Jeff Scarpitti (3 for 3). Greg Emke (starting pitcher) got the win for Parkers (his 23rd win of the season) and Ken Menale closed it out throwing the last two innings. That concluded the 2014 season for Ma Parkers who finished at 27-6 for the season. Parkers also finished strong with a second place finish at The ASA 10 Man C State tournament this year. We made our Sponsor Shirley Parker very happy this year. 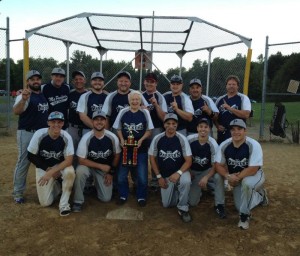