FAT CATS of the Schuylkill County Pa. Twilight Modified League (35 and older) won the 2014 league championship.In the first round of play-offs, Fat Cats won in a best of three game series, 2 games to 1 vs. Pine Grove VFW.

In the Championship round, Fat Cats defeated Paradise Pub 9 to 6 in the first game.  In an exciting second game, Fat Cats came back to tie the game  in the bottom of the 7th. They went on to win 10 to 9 in extra innings to take the title. 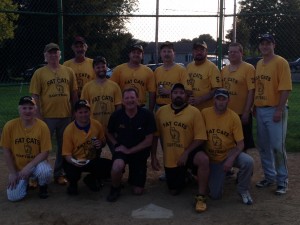