Dempsey & Baxter won the Harborcreek Modified League (near Erie). D&B finished the season with a 36-10 record overall and 17-3 in the Harborcreek League. They defeated Bud Light/Lombardis 15-4 in the championship game.  D&B came in second in the 2014 Pa Class A States and 7th place in the 2014 10 Man Majors in Wisconsin. 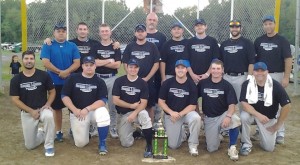